In keeping with the theme of recent blog posts, this article by Hagerty seemed timely.  Let us know your thoughts or experiences.  Thanks! 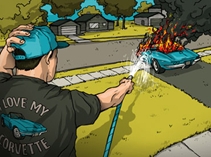 WHAT WENT WRONG: Sometimes a car is so special, it becomes part of the family. And when something happens to that car, the loss can feel particularly difficult. One Hagerty client’s ’66 Corvette was one such car. It was his baby, and he treated it right – especially after completing a full restoration on the iconic C2 model.

One day, he pulled it out of the garage as he prepared to leave for a car show. The Vette was always backed in to the garage, so it was facing the road in his driveway next to his wife’s brand-new car. After going inside to get a cooler, he returned to the Corvette, put it in first gear, and tried to start it up. He heard a little “poof” and noticed some smoke coming from under the hood. In a panic, he jumped from the car and popped the hood. Flames erupted.

Unfortunately, the fire caused a short in the wiring, prompting the starter to kick on. The car was still in first gear, and the parking brake was not engaged. The sudden lurch caused the car to roll out of the driveway into the road.

The owner ran for the garden hose to put out the flames, but by the time he returned to the driveway, the car was far beyond the reach of the water.

DAMAGE: The car was totaled. The fiberglass front-end melted away, and the flames continued through the car, destroying the interior and convertible top.

LOSS: Hagerty paid the client the agreed value of the car: $54,000. While he misses his Corvette, he’s now the proud owner of a Yenko Chevelle.

LESSON: It’s hard to really pinpoint a lesson in this situation. The car was well-maintained, and fresh off a brand-new restoration. The cause of the fire has never been adequately proven; some suspect a build-up in the carburetor caused a back-fire that ignited, but no one is really sure.

The one thing that may have prevented the fire from escalating to the point where it destroyed the car: a proper fire extinguisher. As the client learned the hard way, a garden hose only goes so far.

Fire extinguishers vary in rating, effectiveness, cost and cleanup. Some contain water, others use CO2 or dry chemicals, and still others use “clean agents,” like Halotron, Halon or DuPont FE-36.

Fire extinguishers using water or dry chemicals can be very effective but can also leave a mess, damage wiring and electronics, and require extensive cleanup. Halon 1211, Clean Guard (DuPont FE-36) or Halotron fire extinguishers require little cleanup but are more expensive to purchase and cost more to recharge. CO2 is also a clean suppressant, but it takes a lot to put out a fire, so such units are best for the garage.

BOTTOM LINE: One drop of gasoline on a hot manifold or a single frayed wire is all it takes to start your old car on an unwelcome journey. With older cars, electrical or fuel problems aren’t uncommon. Having a fire extinguisher on hand in the car can prevent a catastrophe